I have currently a small project at home, but got stuck at a stage, so was hoping to get some help from the community.

In essence, I have a Pokeys + Loxone + LED dimmer with driver. I want to send external commands my Loxone via UDP packets, and receive it in Pokeys to command a PWM signal on one of its pwm pins (17-22).

I know Pokeys have a function block called UDP sender which does the similar thing but in the opposite direction.
What I need is something like an UDP receiver, but there is no such thing on the Pokeys.
I tried sending data from Loxone via UDP on port 20057 using some of Pokeys recognized commands such as:

and somehow using PoIL shared slots to send it to a PWM pin, which is connected to a 0-10V PWM dimmer via IRL530N transistor. To accommodate the entire 0-100% duty cycle, I also use an external circuit to translate 0-3.3V from Pokeys to 0-10V to dimmer (schematics in the picture).

no success so far.

did you, by any chance, had this kind of scenario and solved it?

my question exactly is, how do I get a Shared 8/16/32 bit slot to receive external information? where and how do I configure that in Poblocks/Pokeys? my idea was Shared8bit (Shared Slot)-> Output pin22 to dimmer.

any advice would be greatly appreciated. 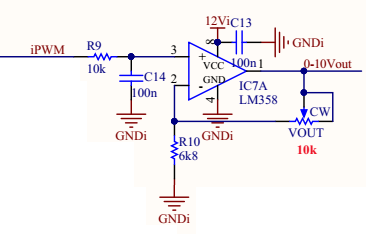 I answer in next time, but i write about this here and i make a PCB with 6 analog out 1-x Volt