I have a bunch of Forest electrical curtains with an embedded zwave motor controller. They work like light dimmers - when you set them to 0 they close, at 100 they are fully open, etc. I have made custom profiles with ‚open‘, ‚close‘ and 25, 50 and 75%. In the mobile app (android) this shows as a dropdown list. So far so good.

What doesn’t work is showing the current state when starting the app. So when I start the app, the dropdowns are set to open, closed or 75% - regardless of the actual state of the curtain/variable in symcon. This is not a matter of the curtains not sending update messages; I only control them using the app, so the symcon server knows the current status.

I’ve tried associating custom actions as described in the last paragraph on Variablenprofile  IP-Symcon :: Automatisierungssoftware . When I did that, everything stopped working - meaning, when I select another value in the app, nothing happens to the curtains.

How do I get this to work? Thanks.

I don’t think that you need a custom action.

You can provide screenshots of both app and console (the current value)?
Can you give some details of your IP-Symcon / App version?

Thanks for the answer.

Seems after more investigation that it’s the value of the property that is wrong, not so much what is shown in the app as I first thought. Although the curtain is fully open, the value as shown in the console is 75. This is the console: 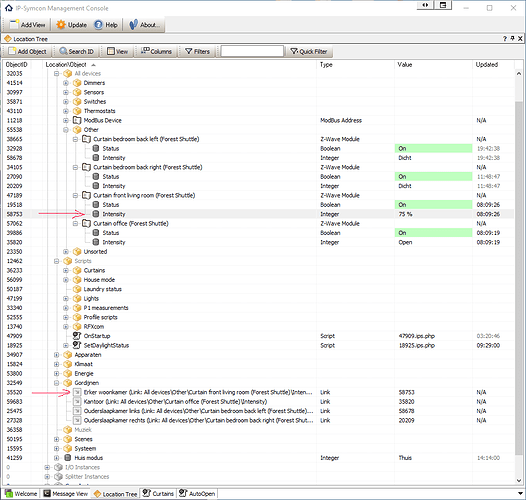 As you can see, I have my instances themselves grouped in a hidden group, and the UI is composed of links to the correct variables. I have indicated the link and the variable it points to. The value of the variable is 75 %. My profile is set up like this: 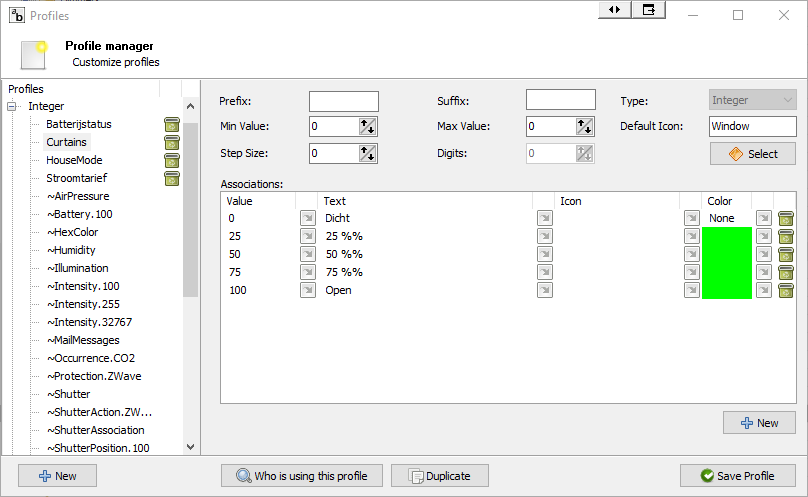 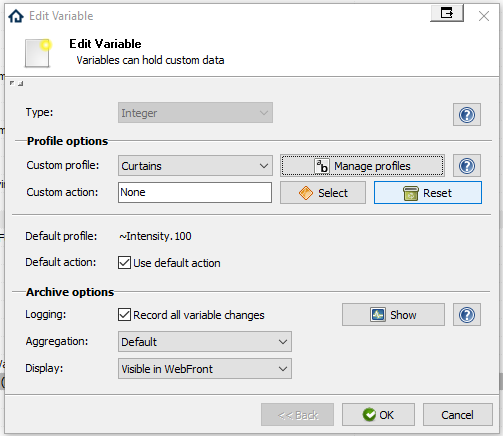 This particular curtain was opened this morning automatically from a script, using

But it also happens (sometimes, which is what makes it hard to debug…) when I open/close from the app. Upon further testing, it seems to happen when two curtains are opened right after another; so when I open one before the other one is fully open, then the status of the first one within ipsymcon isn’t set correctly (although the right value is send to the zwave controller). This would explain why it happens sometimes with the bedroom curtains (which I open one after the other, from the app) and with the living room curtains (which are opened from a script, right before those of the office).

I think this probably has more to do with Z-Wave loosing some device events. Can you check, if you request the status from within the instance, if the variable is getting updated to the correct value?

After a long time I finally had time to have another look, and I think I found the problem.

The curtain can be adjusted (physically) to let the rail not open fully (to make the rail/curtain fit and look better). When this ‚stop block‘ is in place, the curtain will stop just short of fully opening. Then the following happens:

So now I have the following problem: how do I make a variable profile that will correctly show the value 98 as ‚open‘ (100%). I can change the upper limit of the variable profile to be 98, but then when I click open, all curtains (even those that can open to 100%) will only ever go to 98. Ideally, there would be a way to define variable profiles where multiple values are mapped to a single category. Is there any way to set this up without having to work around it with a ‚pseudo variable‘ that I round off in a script?

You can add a new association for the value 98 and name it open. This will have one side effect though. You will have two selections named open.